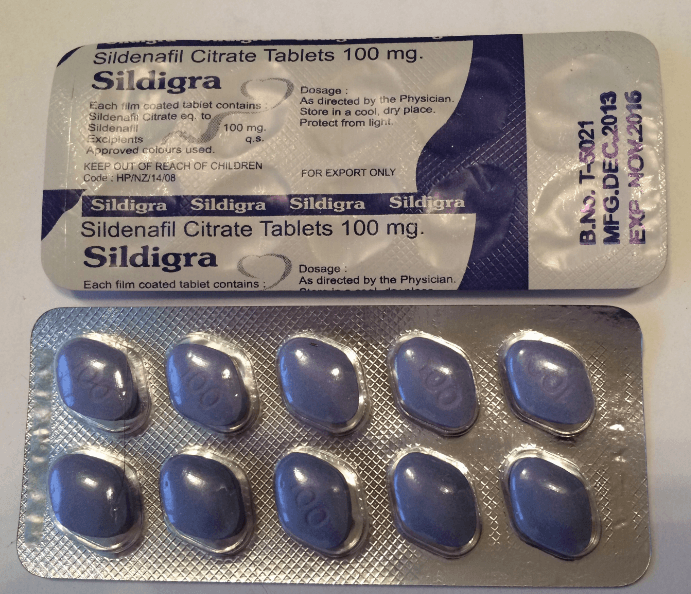 Sildigra, the Sildenafil Citrate creation of Dharam Distributors, is one of the generic options for Viagra. Almost everyone knows about Viagra and its role for impotence treatment and it is currently used for the management of erectile dysfunction. However, the price for the famous product is such a heavy burden for the buyers, which is why they are considering other options for their impotence treatment.

The Sildenafil content of the drug is a confirmed efficacious drug for the treatment of erectile dysfunction [1]. In the past, erectile dysfunction treatments have been uncomfortable and rather invasive, which involved suppositories, injectable drugs, penile arterial surgeries, and hydraulic installations or pumps [2]. These treatments, although in part effective, are tedious and sometimes expensive and risky to use.

Sildigra and Sildenafil Citrate treatments gave hope to the ED-suffering population that impotence treatments can be less invasive, easy to administer and cheap. The product Sildigra can be bought in Indian drugstores and also online and it is available in several forms such as tablets, capsules, soft gel capsules, and chewable pills. However, Sildigra also has a super active or super power version (Sildigra Super Power), or Sildenafil mixed with Dapoxetine or other selective serotonin reuptake inhibitors used for the management of premature ejaculation. Purely Sildenafil Citrate products were only made by the manufacturer for Sildigra.

India is never short of pharmaceutical companies. In fact, India’s pharmaceutical industry is one of the major contributors to world’s drug supply [3], since a lot of Pharma companies are situated and operating in the country, most likely due to the cheaper labor costs and taxes in India.

Dharam distributors claim to be one of the “proficient” makers and merchants of pharmaceutical products in the areas of hormone preparation, men’s potency products, herbal remedies, azithromycin, antibiotics, antipsychotics, antidepressants, and diabetes medicine [4]. It is only a young company which was inaugurated only in 2005 [4] but is already an exporter to a number of countries. In fact, Dharam mentions that 58% of its sales are from its exports to various countries [4].

Dharam Distributors is actually somewhat famed for its products concerning male virility/potency such as its Zhewitra, Snovitra, and Sildigra [4]. These are generic products for the treatment of impotence, which are also widely sold online, much like their more famous equivalents.

Unfortunately, we can’t say what approvals the company currently has, as there was no data for the current accreditations for Dharam. However, we can safely assume that the company is at least India FDA accredited, as the company’s products would not have been sold and distributed freely if they are not approved by at least the Indian FDA.

Besides erectile dysfunction, Sildenafil Citrate is also utilized in the management of pulmonary arterial hypertension in patients. The study of Rubin et al in 2011 analyzed the safety for long-term administration of Sildenafil Citrate in patients with pulmonary hypertension (“Long-term treatment with sildenafil citrate in pulmonary arterial hypertension: the SUPER-2 study”) [5]. 259 patients were able to complete the full course of the clinical trial (treated with up to 80 mg of Sildenafil for 3x/day) [5]. Two study arms were included in this paper, the SUPER 1, where the patients were made to take Sildenafil for PAH for 12 weeks, while SUPER 2 lasted for 3 years. Within 3 years, of all the patients who completed the study, 53 patients died, although the patients’ morbidities were not related to treatment [5]. The study concluded with the authors mentioning that in a period of 3 years, the patients (60%) were able to gain improvements for their PAH symptoms [5]. Overall, Sildenafil for PAH was well-tolerated, with mild to moderate occurrences of side effects [5].

Studies on the pharmacokinetic interactions of Sildenafil were conducted by researchers to determine which drugs are able to influence Sildenafil efficacy in the patients. Stavros et al conducted their study in 2010 named “The effects of sitaxentan on sildenafil pharmacokinetics and pharmacodynamics in healthy subjects” to validate the minimal effect of Sitaxentan, which is an ETRA/endothelin-A receptor antagonist [6]. The authors of the study, Stavros, Kramer, and Wilkins, meant to show that the co-administration of ETRAs and PDE5 inhibitors such as Sildenafil is benign or beneficial [6]. The study recruited 24 individuals who were healthy and were randomized to 100mg Sitaxentan Sodium for seven days then followed by placebo for seven days or placebo for seven days then Sitaxentan Sodium for 7 days [6]. The treatment included the administration of Sildenafil 100 mg on each 7th day of treatment [6]. Based on the results of the study, there were no serious adverse events related to the allocation of both the Sitaxentan and placebo, which led the authors to conclude that Sildenafil Citrate need not be adjusted when taken with Sitaxentan [6].

Since it is established that Sildenafil Citrate is beneficial to patients with impotence, studies were also piloted to determine whether Sildenafil Citrate is able to improve the quality of life of the patients (“The effect of sildenafil on quality of life” by Dording et al in 2013) [7]. 102 patients who were using antidepressants were administered with Sildenafil due to their complaints of sexual dysfunction and were given 50-100mg of Sildenafil on demand [7]. The authors followed-up the patients after 12 months and characterized their improvements in their sexual drive, relationships, treatment satisfaction, libido, overall well-being, and overall contentment using several measures for the mentioned conditions [7]. The data from the study discovered a significant improvement in sex drive and patients’ libido (6th month) and the satisfaction for treatment and overall contentment, although no significant difference was ascertained for the quality of life outcome scores for the patients [7]. Albeit the drug did not improve the quality of life scores of the patients, the drug Sildenafil may still be of assistance to patients suffering from SSRI-induced sexual dysfunctions [7].

Sildenafil Citrate, one of the PDE5 inhibiting drugs, is valuable to the management of erectile dysfunction in patients, as it is able to induce vasodilation towards the penile tissues, which is constructive to the patients’ erectile response.

For patients with erectile dysfunction, Sildenafil Citrate stops PDE5 from its tracks in order for the enzyme not to be able to destroy the chemical transmitter cGMP essential to the erectile function. Under normal circumstances, males do not generally have problems with the cycle of the erectile response. However, patients with erectile dysfunction have their PDE5 characteristically destroy the cGMP before a beneficial erection takes place, which complicates the cycle. Sildenafil’s mechanism is very simple—it actually just stops PDE5 from exerting its effect on cGMP that an erection might take place. From there, the erectile function naturally follows, as the proper levels of cGMP aggregate, in levels which are sufficient enough to induce vasodilation and direct blood flow to the corpus cavernosum of the penis.

Any product containing the said active pharmaceutical ingredient is expected to benefit the patients within an hour of use and since the drug can last up to 4 hours, the males can enjoy 4 hours of proper erectile function which they can use for their coital activities.

Scope of Therapy and Recommended Doses

Although Sildenafil Citrate for erectile dysfunction only lasts for about 4 hours in the body, the patients cannot take the drug for more than once, even if they intend to have one more round of intercourse beyond the 4-hour effect of the drug. This is a safety precaution, since Sildenafil’s side effects may tend to worsen with the increased administration of the drug in the patients.

Side Effects and Alerts

The three most common side effect warnings for patients taking Sildenafil Citrate are facial flushing, headache, and indigestion (probably also one of the reasons why the drug is sometimes advised taken without food). Apart from these, though, patients are also warned against side effects such as heartburn, prolonged and painful erections or “priapism”, hearing loss, nasal congestion, loss of peripheral vision, cyanopsia or blue-tinted vision, blurred sight, NAION, and others [8]. These side effects should be reported during their onset so that the doctors can determine if they are nothing to worry about or if the patients need extra medical help.

As a precaution, patients should be able to identify all the drugs they are administered with prior to their use of Sildenafil Citrate. The drugs should be consulted with their doctors so that the ones which may react to Sildenafil may be circumvented. Drugs which are identified to have their effects on Sildenafil Citrate are protease inhibitors, or drugs for HIV infections, since these drugs tend to amplify the plasma concentrations of Sildenafil, this is why patients who are also administered with protease inhibitors are given only 25 mg of Sildenafil and only once every 2 days/48 hours [8]. Medicines also are known to increase the bioavailability of Sildenafil and caused augmented side effects are cimetidine and erythromycin [8].

Addressing the hypotension aspect of Sildenafil Citrate, patients are not also recommended to use organic nitrate, nitric oxide donor, and nitrate drugs, as well as alpha blockers, which all function to lower the patients’ blood pressure [8].

Although Sildigra is not as popular as the other generic Sildenafil brands for erectile dysfunction, the brand still managed to have several reviews available for it on the Internet:

Sildigra had 5 out of 5-star scores from several users and all of them have the same theme—the “great” efficacy of Sildigra. There were no elaborations from the buyers, but all of them are apparently content with Sildigra’s effect for their erectile function.

The client with the lengthy review on Pharmacyreviewer.com, “woodwayguy” expounded on his experience with Sildigra, which was not too smooth-sailing. Based on his recollection of the events, the Sildigra gave him stomach pain and “hazy” vision and an erection which was not as hard as the P-Force product from Sunrise Remedies. However, on the second go, he only had the stomach upset although it was managed by another medication. Overall, he said the drug was effective, although the buyer complained about the side effects.

Sildigra is available in 50 and 100 mg, which are doses efficacious in eliciting a good erectile response from the patients. The cost of the Sildigra products online are as follows: 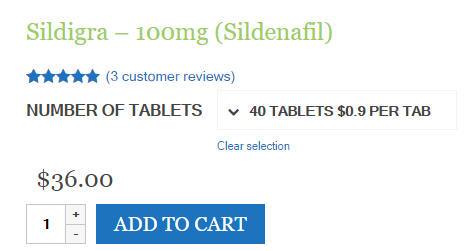 Sildigra, as expected, is another cheap alternative for the brand Viagra. One pill of Sildigra costs only $0.9 per tablet, which is beneficial for the buyers who are indeed looking for less costly alternatives for ED products. The shipping is also fairly reasonable, at $11.99 or $17.99.

The shipping of the product is available all over the world, which means that patients, regardless of where they are, are able to avail of Sildigra products. Currently, there are no advisories for the prohibition of Sildigra dissemination in countries, although it is still advisable for patients to check with their local laws for receiving products from international vendors.

Sildigra 100mg/50mg is yet another product from India, which is one of the largest countries of the world in terms of the annual drug output. The product, Sildigra, is able to treat patients with ED, according to the reviews intended for the product. However, there were also complaints about side effects and the apparent shoddy response that the one patient had from the drug. The reputation of the product’s manufacturer is also a bit shady, due to its lack of information regarding its accreditations for quality. Sildigra, due to this, can only be given a rating of 3 out of 5 and is recommendable if doctors approve of its use for your ED condition.