Hair loss is a common problem faced by almost 50% of the world’s population. Most of this develops in people over the age of 50. However, more and more people are facing the problem of premature hair loss at a younger age.

Due to changes in a person’s hormones, as well as damage to hair follicles and irritation of the scalp, some people have hair that experiences shorter growth periods. Other people find that their hair grows thinner and that they have shorter hair shafts. Hair has phases of rest and growth throughout a person’s life time. Each person has a different phase of rest and growth with their hair follicles. Most people have a growth phase of anagen, or scalp hair, that lasts between two and three years. The resting phase of most people lasts between three and four months. Once the resting phase ends, many hair follicles will fall out of the scalp and new growth will begin. 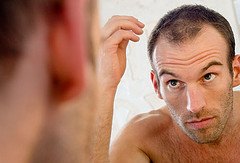 On average, most people lose 100 individuals hairs a day. With more than 100,000 hairs on the scalp, this loss of hair is not noticeable. Premature hair loss occurs when the loss of hair begin to exceed the growth of hair, or when the new growth is much thinner than the lost hair. Hair can also come out in large patches in those experiencing premature hair loss. These phases and problems can be broken down into categories, or specific types of premature hair loss.

Androgenetic alopecia, or pattern baldness, occurs in both men and women. Like most premature hair loss problems, this condition does not discriminate between male or female. As a person gets older, the growth period shortens and the rest period lengthens. The new hair does not root sufficiently to the scalp and begins to easily fall out. This premature hair loss is inherited from a person’s family members.

Cicatricial alopecia, or scarring, occurs in both men and women when a person’s scalp gets inflamed and then scars the follicles. The inflammation prevents new hair from growing within the inflamed area of the scalp. The primary cause of this type of premature hair loss is a skin condition. It is currently unknown what causes the inflammation of the scalp.

Alopecia areata is a premature hair loss condition that occurs in people around the world. This is a conditions that causes a person to lose hair quickly and grow it back quickly. The hair regrowth and loss happens a lot more often in people with this condition. It is unknown what causes this condition, but scientist believe it is inherited and can be triggered by a virus found in the environment.

Telogen effluvium is a hair loss problem found in many people. This occurs to people who experience a major change in the cycles of their scalp hair. It is being attributed to people who have had some sort of shock to their system. Whether this shock is physical, psychological or both, it is not exactly known. People lose a lot of hair at once, but after a few months, the hair begins to grow back.

Traction alopecia occurs a lot in women, even though men can be inflicted. It is caused by styling the hair too much. It also occurs when the hair styling places too much pull on the hair follicles. This conditionwill not become permanent as long as the styling procedures causing this premature hair loss is stopped and scarring of the scalp has not already occurred. However, if scalp scarring has already occurred, the damage to those areas of the scalp is permanent and no hair will grow back.

These are the most probable causes of premature hair loss, but there are other things that can cause hair loss. Some of these causes include, poor nutrition, certain medications, diseases, medical treatments, different scalp infections, hair treatments and hormonal changes in the body.

Once you have noticed that you are losing a lot of hair, or that your scalp hair is thinning, it is best to seek the advice of a physician immediately. Many male patients are using Propecia to treat their premature hair loss condition. In particular, those male patients that are experiencing premature hair loss on the front and top of their scalp.

Studies have shown that men that take Propecia to treat their premature hair loss are often able to grow back their hair. The study showed that 48% of the men prescribed this medication over a five-year period, experienced an increase in hair growth, while 42% of the men that did not have hair growth, did stop losing hair. However, the study also showed that men that stopped taking Propecia often begin losing their hair again after one year.

Propecia works by preventing the testosterone in the male body from being converted into dihydrotestosterone, or DHT. Studies have shown that men who develop premature hair loss have higher levels of DHT in their system. Propecia is used to curb or stop the testosterone from being made into DHT, which, as stated earlier, causes premature hair loss. Since Propecia is stopping DHT from being produced, the DHT levels on the scalp begin to decrease. Once the DHT levels are lowered, men stop losing their hair and new growth begins to develop. The new growth is also stronger and has thicker hair follicles.

Many men expect Propecia to work instantly, but that is not how the medication works. Even though the DHT levels are reduced immediately after taking Propecia, the studies have shown that it takes about three months before men begin to see in changes in their scalp hair. Hair growth continues for more than a year, but the patient can never be taken off the medication, or hair loss will begin again.

Propecia does have common side effects, that some men experience while taking this medication, such as erectile dysfunction, reduced sexual desire and the amount of semen produced during ejaculation. Some of these side effects can be treated by erectile dysfunction and premature ejaculation medications taken in combination with Propecia. Other men that take Propecia develop acne caused by a build up of oil on the scalp. However, only 2% of the men taking Propecia have developed these symptoms, which, again, can be treated by other medications. Most men do not develop any symptoms. 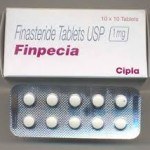 Make sure that when you are looking for a reputable online pharmacy, they provide consultants that you can talk to about the medications they supply. Also make sure that the medications, including Propecia, they sell are being manufactured by a well-known pharmaceutical manufacturer, such as Cipla. Many of the prices these online pharmacies offer will save you a great deal of money over the long run.