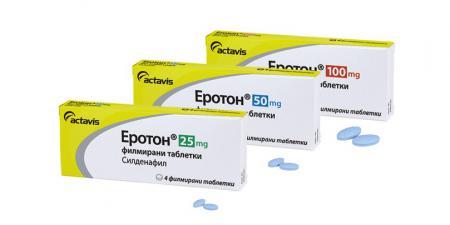 Eroton is a drug used for addressing the issue of male impotence. It is also known as and sold as Epotoh in the European market. Two separate pharmaceutical players are producing Eroton i.e., Bulgaria based Actavis and Georgia-based Fitofarm. Both pharmaceuticals are not related and are producing Eroton in separate capacities, but the formulation and use are the same.

Eroton contains Sildenafil Citrate and is used for management of the erectile dysfunction problems in men. Erectile dysfunction is defined as the inability in men to attain an erection and sustain it long enough for intercourse. As a vasoactive agent, Sildenafil Citrate controls the phosphodiesterase type 5 (PDE5) enzyme and increases the cGMP levels in the in the corpus cavernosum, a vein in the penis. This action generates a stronger erection and maintains it until the completion of sexual intercourse. The vasodilatory properties of Eroton also help in reduction of pulmonary hypertension (PAH) in the body.
Actavis Generics is a pharmaceutical company based in Bulgaria operating since 2000. It prepares different therapeutic products. In 2016, Actavis was acquired by Teva Pharmaceutical Industries Ltd. On the other hand, Fitofarm is based in Georgia and according to some sources in Ukraine and has been in operation since 1989. It has an office in Bulgaria as well. It manufactures pharmaceuticals as well as cosmetics, supplements and medical devices.

Seeking consumer reviews related to any medicine is a viable way of establishing its usefulness in treating a particular condition and its possible side effects. However, Eroton lacks in consumer reviews, thereby leaving a certain degree of doubt around its effectiveness. The same goes for both Actavis and Fitofarm versions of Eroton. The reason behind this ambiguity might be that customers prefer well-known brands over it. Or those who have tried it may not be interested in reviewing it for the benefit of other consumers. Although all the possible minor to major side effects of Eroton have been mentioned, it’s possible that some users might have experienced or will experience a different efficacy level or side effects other than those mentioned. Thus, one doesn’t know for sure how well Eroton lives up to the claims made by both manufacturers regarding its efficacy, or how much safe it is.

Eroton price widely differs in different stores. The Actavis version of Eroton seems to be more widely available than the Fitofarm version. For instance, 50 mg pills generally cost €32 or $34. However, it can be acquired at prices lower than this or even higher. Each pack contains 4 tablets.

Eroton (Actavis) is manufactured in as many as three strengths: 25 mg, 50 mg, and 100 mg, whereas the Fitofarm version is available in 50 and 100 mg. The starting dose is 50 mg but if a user finds it too strong or too weak, then the dose can be lowered or raised accordingly. 25 mg is prescribed by doctors to patients who are concurrently using high blood pressure meds. Only one can tablet can be consumed in 24 hours. The pack comes with an instruction leaflet as well which can be used for guidance.

How to Buy Eroton Online

Eroton is primarily available in online pharmacies based in Europe. That’s why the prices are listed in euros only. Some of these online pharmacies, like the ones indicated below, ship medicines internationally, but the rest deliver the medicine within Europe. Eroton can be bought from most places without submitting a prescription.

Eroton should be administered orally. The ideal time for taking it is an hour before initiating sex. It seems to be more effective when it’s consumed with a light meal or without taking any meal. Alcohol consumption along with taking the medicine may also lower its effectiveness. This medicine is not suitable for patients who suffer from severe hepatic impairment, hypotension, retinal diseases and heart complications. Eroton also shouldn’t be taken with other medicines containing Sildenafil Citrate.

Eroton addresses premature ejaculation problems in men. It contains a vasoactive agent called Sildenafil Citrate. It controls the premature release of PDE5 enzyme and boosts the cGMP levels in the vein in penis called corpus cavernosum. As a result, the penis becomes erect long enough for the successful completion of sexual intercourse. Another condition, Eroton can treat is hypertension in lungs. Although there are two manufacturers who are producing Eroton, no consumer reviews related to it were found anywhere. So there is little evidence of the effectiveness of Eroton beyond the claims made by the manufacturers. The Activas version happens to be more available in European online stores as compared to the Fitofarm version. Most online stores are ready to ship it within Europe and very few offer worldwide shipment. For the aforementioned reason, Eroton is being rated as 1 (on a scale of 1-5). There are other ED management drugs besides Eroton that enjoy a better reputation and credibility, and consumers are advised to opt for them instead of Eroton. In case, someone still wants to give Eroton a try, he is advised to so with the consultation of his doctor.