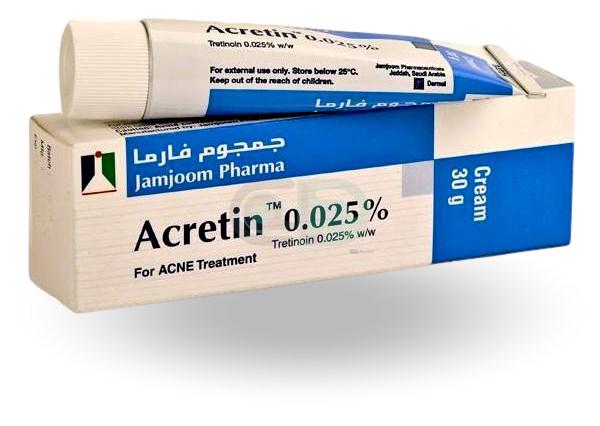 Acretin0.05/0.25 Cream Tretinoin vigorously fight acne and helps in clearing the skin. It is also used by people who want to get rid of their wrinkles and stretch marks. The cream comes in two different kinds of packing according to its potency. 0.025 % cream is packaged in 30 grams collapsible tube made up of aluminum. For 0.05 % potency, the tube used is 20 grams. It is to be used topically and only on the external surface of the skin. One time application at bedtime is sufficient in most of the cases, however, it can vary from person to person. Soft parts of the body like mouth and eyes must never come in contact with Acretin Cream. It must never be used in combination with other products containing benzoyl peroxide. Also, topical therapy of Acretin should not be combined with systemic therapy with a similar drug.

Jamjom Pharma was first launched in the year 2000. It is situated in Jeddah, Saudi Arabia. In a time span of over a decade, the company has managed to bring its name among the most rapidly growing pharmaceutical companies in the Middle East. More than a thousand employees are said to be associated with it. 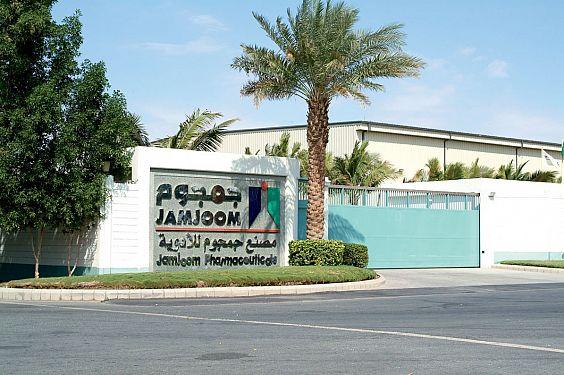 It is also considered among the top five pharmaceutical companies in Saudi Arabia. Due to its high success rate in Saudi Arabia, the company has spread its business to different countries like Algeria and Egypt. It claims that its products are also available internationally in different areas of the world. Jamjom Pharma manufactures different lines of products including Drugs related to dermatology, GIT, medicine, ophthalmology, CVS, OTC and much more. [1]

“High-dose isotretinoin in acne vulgaris: improved treatment outcomes and quality of life” by Amanda A. Cyrulnik et al discussed how isotretinoin in high doses improved the quality of life in patients receiving them. Isotretinoin in high dose has been associated with permanent remission of acne in patients. Low doses of the same active ingredient treat acne but fail to stop its relapsing attack. Hence, 20 percent of people who had been exposed to isotretinoin in low doses experience a relapse within 2 years of the treatment. This study was established to find out the relationship of high doses of isotretinoin with acne and improvement of the quality of life in people receiving it. It was an investigation held by a single institute of dermatology. About eighty patients who were suffering from nodular acne were a part of this study. Each of these patients received isotretinoin daily in a dose of 1.3 mg/kg or higher for three years. These subjects were held under the supervision between the year 2006 and 2009. In addition, they were also supposed to participate in a QOL survey to determine the quality of their lives and impact of isotretinoin on it. Clearance time and the number of relapses were also to be measured in this study. A cumulative dose of 290 mg/kg of isotretinoin was given to the patients involved in this study. No reports of withdrawal or discontinuation of isotretinoin due to side effects were seen during the session. No one suffered from psychotic symptoms and all of the patients enrolled in this study were cured of acne completely. 12.5 percent of the patient, however, experienced a relapse of acne in the next three years following this therapy and had to be treated with isotretinoin again. QOL survey report suggested an increment seen in the quality of life of these acne treated patients. It was concluded that it is completely safe to give isotretinoin in a dose of 1.5 mg/kg or more in patients suffering from severe nodular acne as it is more effective than the standard dose. Further studies must be directed towards this conclusion for a better understanding. [2]

“What’s new in acne? An analysis of systematic reviews and clinically significant trials published in 2010–11” by R. C. Simpson et al offered a summarized version of all the studies and the conclusions derived from them in the year 2010-11. It said that no direct link has been proven between the use of antibiotics for treating acne and the resistance that is established to these drugs in our body. However, it is advised to stop the treatment with these antibiotics when it is suitable and switch to benzoyl peroxide. It is also advised never to use the systemic and topical drugs together for acne. IT was also shown that an application of different products containing benzoyl peroxide was not as effective as monotherapy in case of acne. One of the reviews did prove them to be effective for acne in women, however, in another review about botanical products; these were rendered as highly ineffective. A study was also performed to analyze the link between suicidal thoughts and isotretinoin. It was seen that suicidal thoughts did develop in people using isotretinoin after 6 months but most of these patients were already at a risk of experiencing them even before the treatment was started. It was also seen that people who had a history of attempting suicide did it way lesser than those who started having suicidal thoughts while taking isotretinoin. This proved that isotretinoin should not be discarded as an option for people who are suffering from depression. Another trial study suggested that it is better to give isotretinoin in low doses to treat acne as well as experience minimum side effects. [3]

Description and Mechanism of Action of Isotretinoin

Isotretinoin works by considerably lessening the size and production of sebum by the sebaceous glands on the skin. Sebum in excess can cause blockage of the pores on the surface of the skin. It also decreases the process of normal cell shedding. Both sebum and these cells stick together to create plugs in the skin pores. These pores are later inflamed as the bacteria colonize it, causing pimples. Since isotretinoin reduces sebum and promotes cell shedding, it prevents acne. It also increases cell turnover rate and skin regeneration rate as well. [4]

Acretin Effects for Acne and Wrinkles

Acretin comprises of isotretinoin in his composition. It is not a harsh medicine; therefore, it causes minimum dryness. Clinical benefits of Acretin ranges from treating acne to stretch marks. It also produces guaranteed results in improving wrinkles and fine lines which can be clearly seen by comparing the before and after results of using isotretinoin. Isotretinoin guarantees to combat acne that has not responded to other medicinal as well as herbal remedies. Other uses include skin smoothening and skin hydrating by removing patchiness. [5]

It is advised to wash hands and the diseased area prior to applying Acretin cream on it. This can be done using any mild cleanser. The skin should be dried by patting it gently. Squeeze out a pea size of Acretin cream on the affected skin sand apply it evenly in a thin layer on the skin using the fingertips. It is sufficient to apply Acretin once daily preferably at bedtime. Dosage can vary according to the doctor’s prescription. The therapy continues for at least 4 months to get rid of acne properly. [6]

Side effects to Expect and Warnings

The most common side effect of using Acretin cream is general dryness of skin. Serum lipid levels are drastically increased due to this drug as well. Skin pigmentation can either increase on the decrease. There might be swelling of hands and feet in the patient. The patient may suffer from conjunctivitis. His skin becomes sensitive to sunlight and gets irritated easily. Stinging can also be felt at the site of application. Use of Acretin can also be followed by abdominal pain and diarrhea. Hands and feet might become numb. The patient can feel pain in bones and joints. Lips might become cracked. The patient can get confused and depressed at times. Hair loss is also a side effect associated with Acretin. Changes in eyesight and hearing might also be observed. [7]

Tetracyclines including doxycycline and minocycline should be avoided when a person is using Acretin because it can lead to an increased BP in the brain. The combination of retinoids with antacids is found to enhance the working of these antacids in healing ulcers. Blood-thinning medicines like warfarin when taken along with Acretin cause bleeding disorders due to excessive thinning of the blood. Cholesterol-lowering medicines reduce the absorption of retinoids by the body decreasing their serum levels. Retinoids enhance the activity of Doxorubicin. Neomycin also reduces the ability of the body to absorb retinoids. Other retinoids or creams containing benzoyl peroxide when used with Acretin can cause worsening of side effects. [8]

Acretin cream did not have any reviews regarding its quality or effectiveness on any website on the internet. Feedback reviews serve as an authentic and reliable source for finding of a particular drug. The customer gets a chance to decide for himself about choosing a drug after interpreting from real life experiences of other customers. Drugs like Acretin that lack in this section is rendered as suspicious. Because this drug is manufactured and sold in Arabic countries, the lack of reviews can be justified as giving a feedback is not a common habit of the people belonging to these areas. Nevertheless, Acretin must be avoided as nothing can be said about it with full surety.

Acretin in 0.05 percent potency is available for purchase in a tube form on www.yaoota.com. It is set at a price of 8 EGP which is equivalent to 0.44 US Dollars. The drug is cheap and easily affordable.

No information about the shipping of this drug to other countries like US, Canada, and Australia could be found. It seems like Acretin is sold in the local markets of the Arab countries only. Even the online stores who sell Acretin do not offer international shipping. This can be a problem for people residing in other areas of the world who wish to try out this cream but can’t because of its unavailability.

Acretin cream is manufactured in the form of cream in two different potencies i.e. 0.05 percent and 0.025 percent. The cream is to be applied topically twice a day. Instructions can vary according to the patient’s weight. 1mg/kg of isotretinoin is usually considered to be the limit dose for a person for a single day.

Acretin cream is a cream for Arab Countries. It is manufactured and sold in these countries only. As a customer residing in areas other than these, I find this drug unapproachable and, therefore, useless. Because these areas also lack a trend of giving feedback reviews about a drug, I could not find anything in this regard for Acretin as well. The manufacturing company is also not a famous one so nothing can be said about it as well. It is a cheap drug but of no use because of its unavailability. With no information about anything in particular about this drug, I can say that this drug is better off in Arab countries. I will give it 1 out of 5 and would ask people to stick to other drugs that at least have a guarantee of being effective.